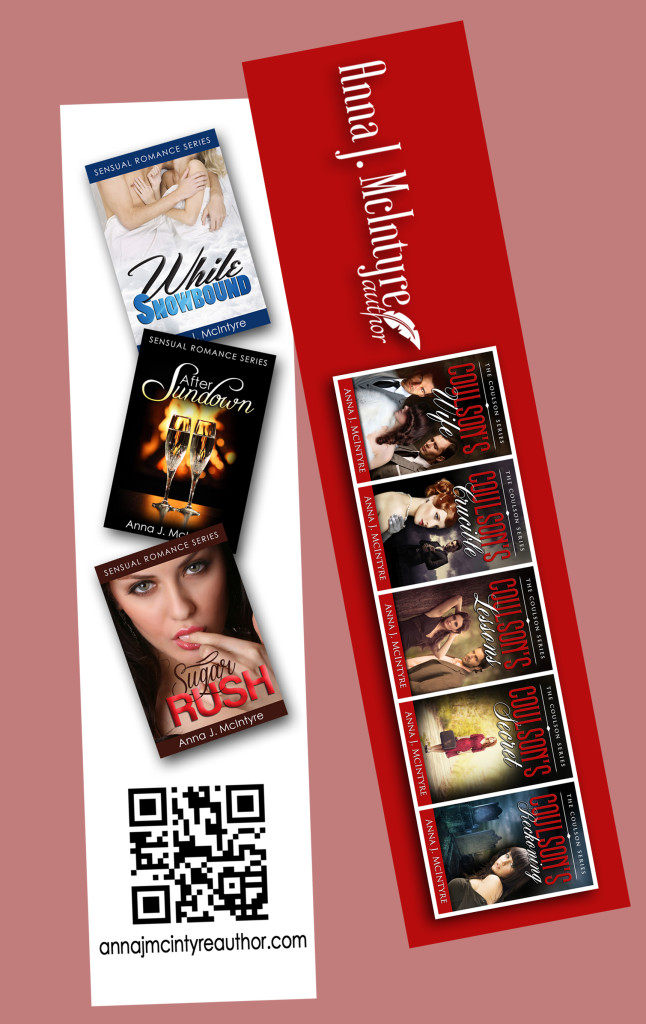 It’s been a busy week around my office. All of my books will be coming out in paperback in the very near future – in time for Christmas.  Today we finished up the design for our new bookmarks. As you can see, it is double sided – with the QR Code on the backside, to quickly bring scanners to this website.

Sales on The Coulson Series have been brisk – with the recent release of Coulson’s Wife and Coulson’s Crucible, the first two books in the series.

For some of my readers – those more looking for a lighter, fluffy romance as they expect to find in one of my Sensual Romance books, Coulson’s Wife may come as a bit of a surprise.

One reviewer wrote: I’m actually giving this book 3.5 stars…I’m not sure if I just like it or really liked it. This is not a happy ever after book. I was so sad at the beginning of the book young Mary Ellen being forced to marry a man she doesn’t know or love. I know that these things happened but it’s still not right. My heart broke for her, even more when she falls in love with her husbands best friend. I kept hoping that the two would get there happy ending but that’s not what happened. I shed quite a few tears while reading this book but I couldn’t bring myself to put it down. It was well worth reading.

I’m flattered this reader couldn’t put it down – in spite of the fact it wasn’t what she expected. Personally, I don’t think the ending is as much sad as it is bittersweet – and I hope readers understand this is the story that begins the family saga – and each book tells a very different story in the family’s history.

Coulson’s Wife tells the unusual marriage of Coulson’s founder. Readers learn of a family secret that won’t be revealed for almost a century – in the fifth book of the series, Coulson’s Reckoning.

Coulson’s Crucible tells the story of the second generation – and introduces children that we meet again as adults, in Coulson’s Lessons.

The third book in the series, was actually the first written – Coulson’s Lessons. It was initially released as Lessons. I’ve been told While Snowbound, in my Sensual Romance Series is more sweet than sexy. For my readers looking for a bit more heat, they might read Coulson’s Lessons. Of the first four Coulson books, it is the steamiest.

If you’ve read and enjoyed Coulson’s Wife, I would really appreciate an honest review at Amazon.