Tell me the year you first read Diana Gabaldon’s Outlander 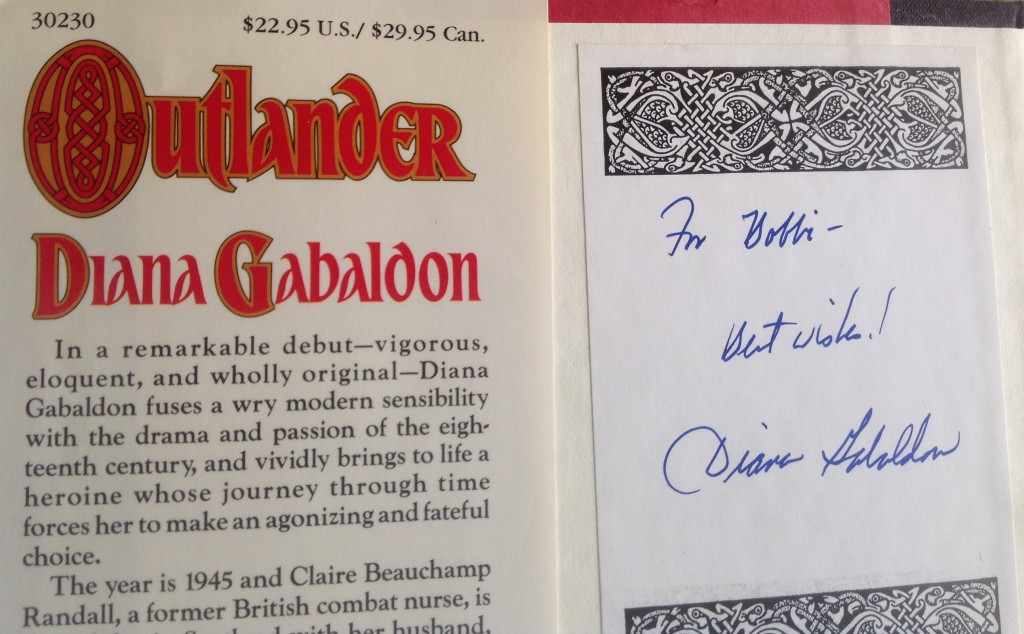 When I was a teenager you wouldn’t find celebrity posters on my wall. Had I been a little older and made it to a Beatle’s concert during their prime, you wouldn’t find me jumping up and down excitedly, tears running down my face. Fact is, I’m not much of a fangirl. Just not my style.

There is one exception—the author Diana Gabaldon. A couple of my author friends have attended conferences with Gabaldon and when they mention seeing her, I tend to go all fangirl on them.

I often joke that I was the original fan who made Gabaldon famous. After all, there had to be a first, right?

It was back in the early nineties and I had joined one of those book clubs. Remember them? Back before eBooks became the thing. You’d join the club and select five or six books that they would send you for free and then every month they would send you a new book.

Always a sucker for time travel, I chose Outlander as one of my freebees. Until the book club, I had never heard of Outlander or of Gabaldon.

When I finished reading Outlander I immediately started looking for other books in the series. I also started telling everyone I knew about it. At the restaurant I managed for my parents, I convinced one of our servers to read the book. She became an avid Gabaldon fan and told all her friends they had to read the series.

I got my sister, Lynn, to read Outlander. She fell in love with Jamie and went on to tell all her friends about the books. For several of my birthdays Lynn bought me hardback editions of the series—the first two were signed by Gabaldon.

The entire thing snowballed—we would tell someone they had to read the first book in the series, and after they did, they would in turn tell their friends.

Two decades after reading Outlander, I was discussing books with my daughter-in-law, who is an avid reader. I told her she had to read Diana Gabaldon’s series. It turned out she already had—and it was one of her favorites.

As a writer, I’ve naturally been inspired—and humbled—by Diana Gabaldon the author. It wasn’t long after I read Outlander that I sat down and wrote Lessons, now entitled Coulson’s Lessons, which is the third book in my Coulson’s Series. While Lessons is nothing like Oulander, I will confess the location of Alexandra and Garret’s honeymoon was inspired by Outlander.

I learned they were making Outander into a movie from my sister, Lynn. In July we signed up for Starz. I ended up watching the first episode twice. Lynn watched it three times.

While I would love to think I am THE fan who got the snowball going on the Outlander Series, I accept the fact it is simply my delusion. But just in case it is not a delusion, answer two questions for me.