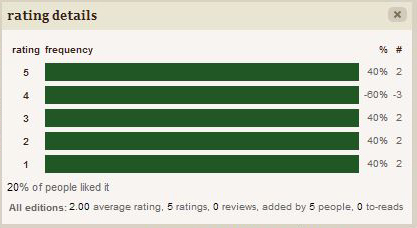 It seems Goodreads has some ghost reviewers—anonymous reviewers who slip in, rate books and then disappear. At least, that seems to be what happened to my newest book, Haunting Danielle.

Less than two days after Haunting Danielle was released I logged into Goodreads and was stunned to find five people had supposedly already read and rated the book on Goodreads, giving my shiny new release a dismal 2-star average.

What struck me as odd was that it had that many ratings in such a short time. As most people in this business know, it takes a good number of readers to read a book before reviews or ratings start showing up. (I’m not talking of reviews left by friends or family members.)

To give you an idea how many sales it takes to generate reviews—I’ve a bestselling author friend whose new release was selling about 150 times more than mine – and during the first few days after his release it only had about 23 reviews.

As for Haunting Danielle, when I checked to see who were the five people who supposedly rated it—there was only one Goodreads member who’d rated my book—and that person gave it 5-stars.

Minus people??? I’ve a friend who’s a Goodreads librarian and I asked her to look at it. She thought the minus-3 reviewers was pretty bizarre and said it looked like some technical glitch. She suggested I try contacting Goodreads, which I had already done. So far, they have not responded.

Sometimes over at Goodreads a rating will show up before it’s reveal who left it. Yet, that normally happens within 24 hours. It’s been over 48 hours, and they remain ghosts.

Since this all started I’ve picked up six more ratings—three are people I personally know who read my books—one is a Goodreads member I recognize who has read some of my other books—and two are my author names. I normally never rate one of my books, as do some other Goodreads authors. Yet, until Goodreads straightens out this technical glitch—and I do believe it is a glitch—I’ll leave up my ratings to balance the scales.

As for those ghost reviews that showed up just a day or so after the book came out, there still is no sign of the 10 Goodreads members who supposedly left those first ratings. Not 10 exactly—7 people and 3 minus people.

Since Haunting Danielle is a ghost story, perhaps it’s fitting that its Goodreads page is haunted.